Fish and seafood consumption in Croatia 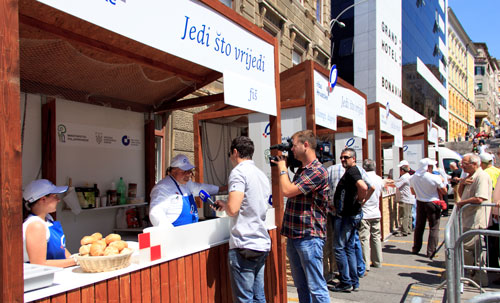 This article was featured in Eurofish Magazine 4 2021.

The analysis showed that net supply of fishery and aquaculture products available to the domestic population in Croatia in 2018 amounted to 73,838 tonnes, while in 2019 it amounted to 81,387 tonnes of live weight equivalent. The utilisation by commodity groups indicates that fresh or chilled fish, cephalopods, fish fillets and prepared or canned fish were consumed in the highest quantities, whilst dried, salted or smoked fish, crustaceans and molluscs (excluding cephalopods), and frozen fish were consumed in lower quantities.

In terms of apparent consumption of species or groups of organisms (according to their biological characteristics), the largest quantities are represented by marine organisms, primarily small pelagic fish (sardine, anchovy), cephalopods (squid, cuttlefish, octopus), demersal species such as hake, whiting, other codfishes, flatfish and other groundfish, and other marine fish (sea bass, sea bream, etc.), while freshwater fish (including diadromous species) occupy the lowest place in overall availability and consumption.

Results from the analysis correspond to figures published by EUMOFA

Apparent consumption reflects the availability of a certain food product at the retail level in a country during a specific period (i.e., quantities reaching the final consumer). The purpose of the survey was to substantiate the data and results on per capita consumption of fishery and aquaculture products in Croatia, published by EUMOFA and FAOSTAT, which are based on supply balance sheets and food balance sheets, respectively. According to the EUMOFA survey conducted for all EU member states, apparent consumption of fishery and aquaculture products in Croatia in 2017 was 18.7 kg per capita, and in 2018 was 19.19 kg. The availability of fishery and aquaculture products for human consumption is generally calculated from domestic production and foreign trade, and the formula is expressed as follows: capture fisheries + aquaculture + imports – exports. Apparent human consumption per capita is derived from net supply divided by the population. The same approach was used in this research, but with different presentation of the data (commodities instead of production from capture fisheries and aquaculture).

This model of data presentation was first published by the Food and Agriculture Organisation (FAO). Data were collected from publicly available sources (Croatian Bureau of Statistics) as well as from the internal database of the Directorate of Fisheries. As for the standardisation and harmonisation of the data and presentation of the results, the production was sorted according to the Organisation for Economic Cooperation and Development (OECD) nomenclature for products (commodity groups), i.e., fresh or chilled (fish) and processed (frozen, fillets, dried, salted and smoked and prepared or canned) products

(fish and other aquatic organisms), instead of production given by species or groups of species with similar biological characteristics. This provides for a more precise insight into the availability of a particular commodity group or product category on the market. Foreign trade was also harmonised according to the same commodity groups. As various statistics differ in the way they are presented (capture fisheries and aquaculture are expressed in live weight), conversion factors from EUMOFA were used to calculate the net weight of import, export, and seafood processing production data into live weight equivalent.

It is important to emphasise that data on products not intended for human consumption (industrial and other uses), have been excluded from the calculation. These include imported herring and other small pelagic fish (sardine from domestic marine capture fisheries production) used as feed in the farming of bluefin tuna and as raw material to produce fishmeal. These data were obtained from official statistics and interviews with members of the fish processing industry. On the other hand, other sets of data were included in the calculation, such as those on non-commercial fisheries production, namely marine subsistence fishery, and inland and marine sport and recreational fishing, which were based on internal estimations. Additionally, since Croatia is visited by a large number of foreign tourists each year, the availability and apparent consumption of fishery and aquaculture products by foreign tourists was also calculated and then deducted from the consumption of domestic population. The method was based on earlier work by Croatian authors, which estimated the consumption of agricultural products of foreign tourists by multiplying data on the total number of overnight stays with daily consumption of tourists, expressed in grams. The authors gathered data on normative consumption for individual food staples per guest per day with questionnaires to hotel chains.

In the present study, the authors followed the assumption of FAO that, in the country visited, tourists consume the same total amount of food available to them in their home countries. Therefore, the data on daily availability of products of fisheries and aquaculture, expressed as grams per capita per day was obtained from FAOSTAT. Data on food supply were taken for the categories: freshwater fish, demersal fish, pelagic fish, marine fish other, crustaceans, cephalopods, other molluscs, and aquatic animals (others). The data was used only for those countries for which more than one million overnight stays were recorded. The average value of the available grams per capita per day (0.051g) was then multiplied with the number of total tourist overnight stays (Croatian Bureau of Statistics) for reference years.

The Directorate of Fisheries, has launched a traceability system for bluefin tuna and swordfish from the Adriatic Sea (https:// ribarstvo.hr/hriba/), enabling product branding and providing the final consumer with full information on the fisher who caught the fish, the area where it was caught, and the fishing gear used. A project by the Croatian Chamber of Economy is called Fish from Croatia (Riba Hrvatske – Jedi što vrijedi). The logo, Fish from Croatia, on local products validates to the consumers that the products come from a strictly controlled food safety system, that the production process meets environmental safety standards and requirements, that production is conducted sustainably, and that workers’ rights and other relevant national and EU regulations are respected. These, and other, initiatives promote locally caught or farmed fishery and aquaculture products by emphasising comparative advantages, setting high standards, and thereby achieving better positioning in markets in Croatia and the EU. This in turn should boost availability and overall consumption of fisheries and aquaculture products is expected to grow in the forthcoming period.

More in this category: « Assisting the European fisheries and aquaculture sector through a pandemic
back to top